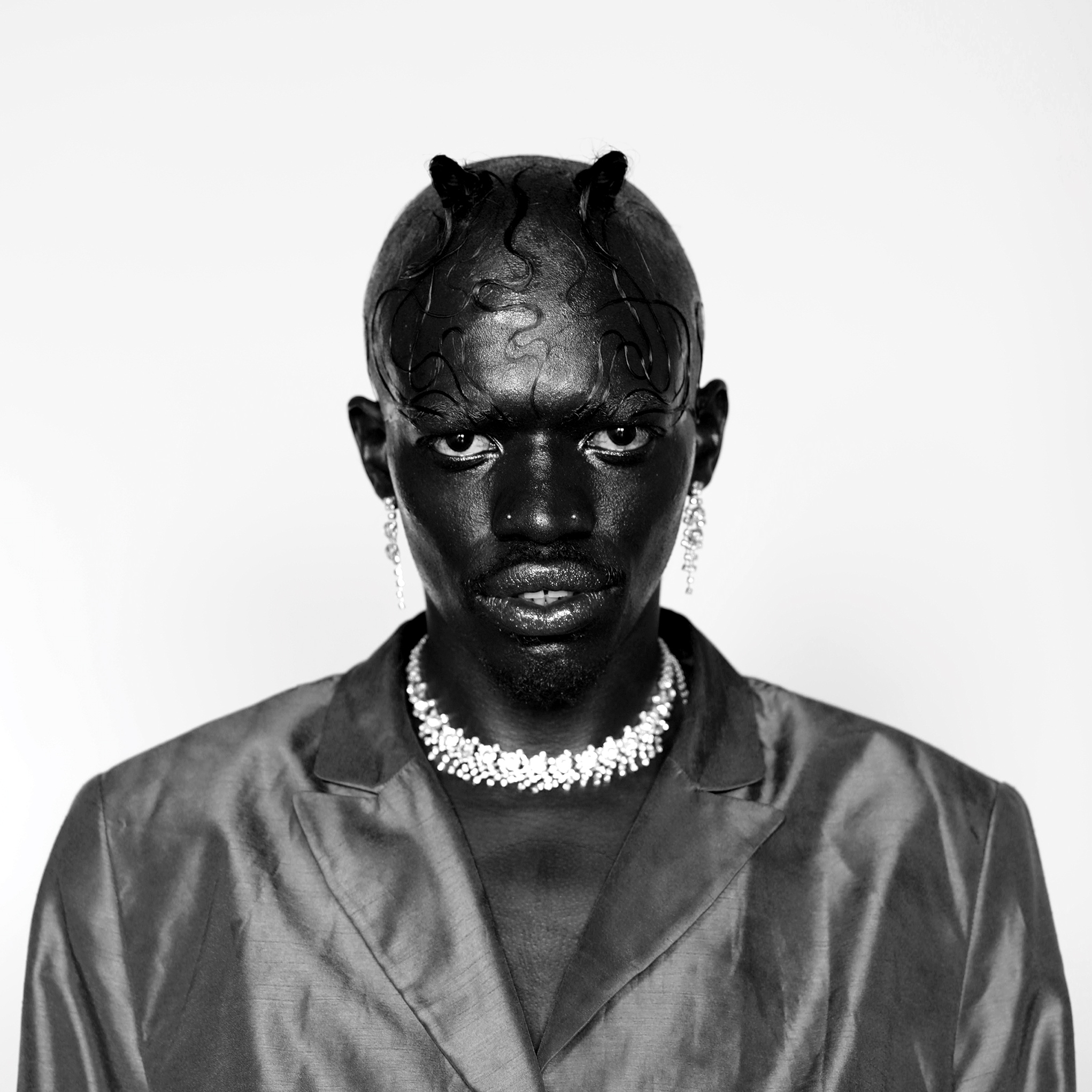 Desire stands alone, satin-clad and bejewelled. Twin horns wink at us naughtily, crowning them, only to disintegrate and melt, descending into slick baby waves over their forehead – just above their eyes. Desire stares: flirtatious and furious, direct and vulnerable.

Dripping darkly, captured by Zanele Muholi’s glass eye, Desire meets our gaze in black and white, a study in contrast. This striking monochromatic portrait is our first impression: the image that frames Desire’s self-titled debut album, Desire. Despite its starkly colourless face, Desire is kaleidoscopic. The album is a haunting series of meditations fractured into nine meticulously crafted tracks. Staggering in its sonic ambition, Desire traverses genres with the ease of a black hand over silk.

Its experimental opener, “Self Centre”, sets Desire into motion slowly, crackling with feedback. The icy static eventually melts, introducing us to an organ’s thick warbling, its chords buoyed by a synthy, horn-heavy arrangement. Desire’s voice appears, only to disappear again, distorted behind the sparkle of futuristic glitches. The effect is ghostly and metallic; we are about to witness a birth, beautiful and bizarre.

"we are about to experience a birth, beautiful and bizarre"

Desire begins in earnest with the urgent siren sounds of “Zibuyile Izimmakade”. It’s a twitchy track pulsing with energy, at once deeply spiritual with its black Wesleyan staccato whistles, straight out of Amadodana Ase Wesile – but also cheekily playful with its clever synth-shimmery percussion. After teasing us, Desire finally arrives two minutes in, their iconic voice emerging as an operatic gift, melding with the music with the slickness of hot oil. The track is gorgeously syncretic, fusing Desire’s quickly multiplying voice with what sounds like the hooting of an owl – both spirit and animal. One gets the impression that Desire is in a constantly looping sonic conversation with their elders, fraught with the kind of tension and deep reverence that black queers know well. This only makes “Zibuyile Izimmakade” even more darkly ethereal, dripping in a kind of chaotic ancestral grace.

As Desire croons “squeeze me…” the track takes on an entirely different life, flashing with trip-hop & techno inflections, alongside the gender-bending vocal contributions of SA’s beloved genre-wizard Nonku Phiri. Together, their voices suspend time: suddenly reminiscent of Portishead’s 1995 wonder, Dummy; Angel-Ho’s transcendent 2019 offering, Death Becomes Her; and Massive Attack’s 1991 album Blue Lines. It sparkles with monastic slipperiness, signalling the genre time-travelling that is still yet to come on the rest of the album.

Just when you think “Tavern Kween” couldn’t get any better, the track sparkles with a middle-horn section and a woozy, muted guitar solo that’s equal parts Sophiatown jazz and KZN-birthed maskandi. One gets the impression of a historic procession of black revellers, dancers, shebeen queers and musicians: all arming ourselves against the thorns of oppression with whatever drunken joy we could thieve for ourselves (“ngibonise ubumnandi […] siphuzani?”). “Tavern Kween” is a racy love letter to the night, thrumming with dark, warm sensuality. It’s sure to set a dancefloor ablaze soon, somewhere in Braam, or Berlin.

"'Tavern Kween' is a racy love letter to the night, thrumming with dark, warm sensuality. It’s sure to set a dancefloor ablaze soon, somewhere in Braam, or Berlin."

Soon after the heady highs of the dancefloor, Desire turns a corner into the numinous. “Thokozani” explores the mysterious, untouched space known mostly to healers, while remaining hypnotic, repetitive and percussive in a trance-like sonic space. Here, Desire’s voice is mashed, chopped and screwed à la Faithless or the more contemporary serpentwithfeet, while playing with both technological and traditional sounds reminiscent of instruments like the marimbas and the mbira. Later on, in “The Void”, Desire twists their vocals into screams and snarls, at times sounding like a dying creature. Their growls lead us ever-deeper into the album’s interiority: where themes of depression, monstrosity, trauma and masculinity lie in wait. Unlike the famed anti-apartheid anthem penned in 1987, Desire’s monster is both roaring and weeping, with pain and rage crystallising together in the album’s final third.

Drawing us into Desire’s conclusion, “Uncle Kenny” pools with themes of grief and trauma, with Desire crooning in Nakhane-like crystal clarity: “It’s a space, it’s an empty space / where the demons play in my face” and later “I’m not as I was before… I’ve been through a lot”, and later still, elegiacally: “constant loss is testing my faith […] I feel alone / perishing in a beam of light”. It’s impossibly tender, humming with loss. This thread is picked up again, from a different perspective in “Ntokozo”, with its jazz piano & double-bass flourishes reminiscent of South African wonders like Thandi Ntuli, Bokani Dyer and Benjamin Jephta. Here, Desire snarls against a background of jazzy ash and smoke: “You play with my feelings / you play with my time / you’re trying to kill me”, evoking tragedies made infamous like the trumpeter Lee Morgan’s murder at the hands of his wife, Helen Moore, in the early seventies.

We are unmistakeably, undeniably blessed to have an artist like Desire in our midst. Their debut offering is an immensely generous gift, bursting with complexity, stubbornly experimental, and infused with a ferocious originality. The making of Desire in the artists’ own words has “been such a long, heavy journey that I feel like I have just transcended.” May they bask in their own transcendence, as we are blessed to transcend ourselves in their art.