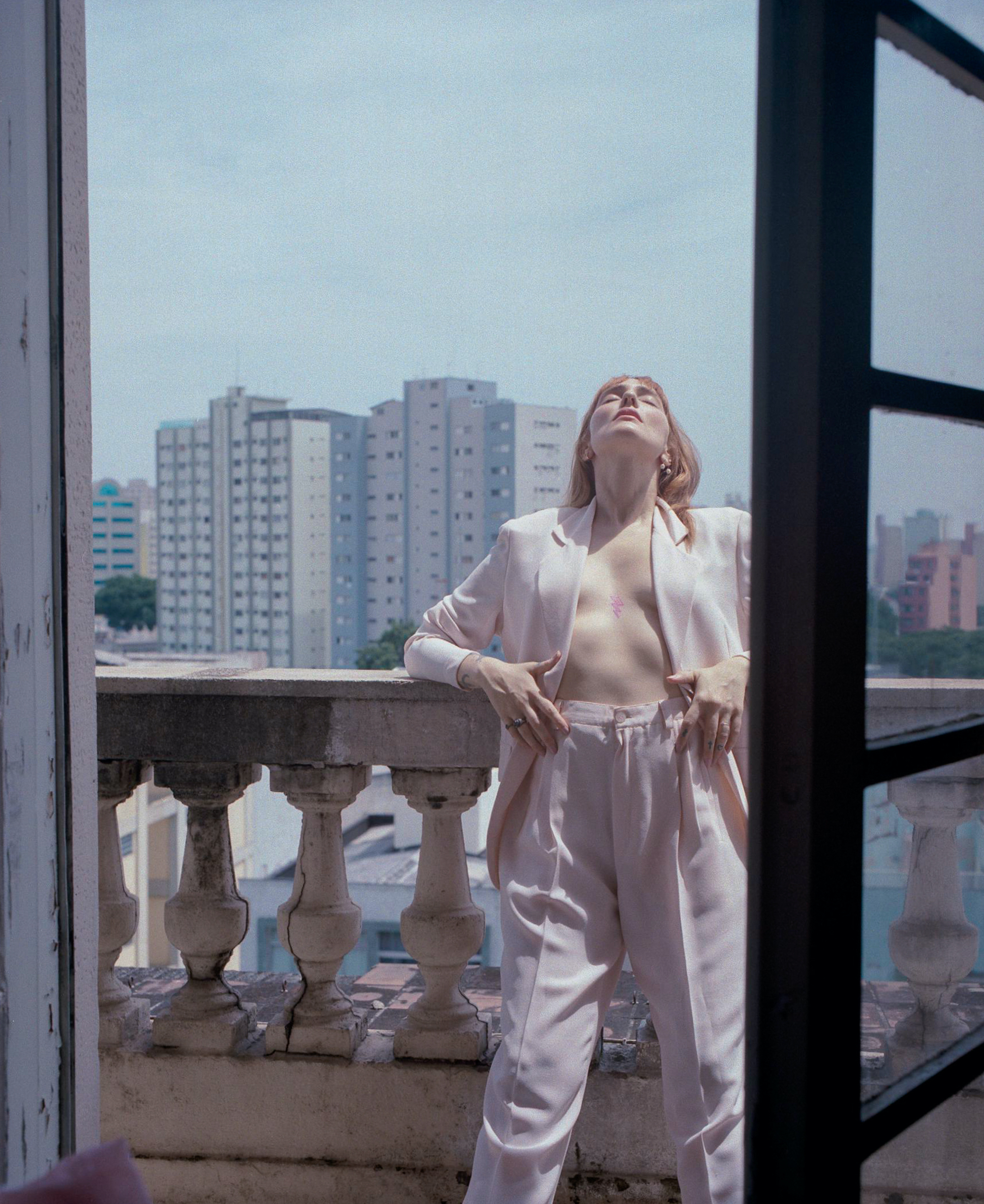 The Cape Town-based fashion, portrait and documentary photographer gives us the locals' view on a trip to Brazil during carnival season, days before the global lockdown. Today, Brazil has the second highest number of COVID-19 infections in the world after the U.S while surviving a fascist president that threatens to divide the country more than ever.

The photographic series gives us a glimpse into life before the pandemic, as seen through the models, artists and every day people from the city’s subcultures. Set against the backdrop of São Paulo’s pastels, impressive brutalist architecture and absurdly great eccentric style.

How would you describe the city life in São Paulo before you left?
São Paulo is a megalopolis. It’s among the most populous metropolitan areas in the world and serves as the financial capital of Brazil. The city is fast paced, runs 24/7 and is often rude - simply because people have places to be and people to see. São Paulo is also seemingly never ending, making it the city with the largest helicopter fleet in the world. One notices the beauty of the people, much earlier than that of the cityscape or architecture. Pink hair, blue hair, green hair and purple dreads. Pierced skin and inked skin - São Paulo has some of the most electrifying, undiscovered street style on the planet. The people are expressive, vibrant and outlandish with their style.

How did you find yourself there and where are you right now?

At the end of 2018 I started a tour of South America with nothing but my backpack and my trusty film camera. I stayed with a friend I met in Berlin for a few weeks, who is a São Paulo resident or ‘Paulista’. After a few mishaps and unfortunate events, I initially had a bad taste of the city after I left. Skip to one year later, sitting in Cape Town where I’m based, I had the sudden urge to do a photo series about Brazil. It was a month before carnival and I contacted some of my friends that I met in the city to arrange for shooting some artists, models and musicians that they knew from social groups.

"São Paulo has some of the most electrifying, undiscovered street style on the planet. The people are expressive, vibrant and outlandish with their style"

How would you describe young people’s attitude towards the fascist government in Brazil?

Sao Paulo has the most progressive stance towards the government in Brazil - it’s clear in the city’s counterculture. São Paulo has one of the largest pride parades in the world, along with one of the most prominent global LGBTQ communities. With the government's predominantly male cabinet and a president that many describe as “Trump of the Tropics”, it's easy to see why the people show strong anarchy and resistance towards it.

When did you start shooting (film)?

I took an Olympus point and shoot camera on a trip to England with a mate in 2017. In mid 2019, whilst in Milan for a few weeks, I started pointing the camera more seriously towards people.

"a president that many may describe as "Trump of the Tropics", it's easy to see why the people show strong anarchy and resistance towards it"

How would you describe your style of photography?

Up close and personal, often portraying a sense of nostalgia, longing and vulnerability.

The subjects or subject at hand. I draw inspiration from people's looks, style, personalities or characteristics. Many people are shy or oblivious to their beauty. It’s nice to tell these people’s stories through photography and get both the onlooker and subject excited about creating something in collaboration that did not exist before. I often surrender to spontaneity - having one idea before going into the field or a shoot and then just wholesomely feed off the subject or energy at the time.

And what were you inspired by the most during your time in São Paulo?

People's willingness to work together really got me going. Analogue photography is a bit more of a novelty there it would seem as prices are higher and availability a bit more scarce, meaning people were very keen to shoot. I was thinking I was going to take predominantly street portraits during carnival parties or ‘Blocos’, but I ended up being able to photograph many people willing to participate in the photo project.

Which of these photographs do you find yourself drawn to the most?

There are two - The first one would be the one of Paolla Di Monica, a red-head, Paulista model, leaning back on her balcony, wearing a pink suit. The baby pink and blue hues, along with her pink thunderbolt tattoo on her chest captures the spirit of the city perfectly in my eyes. She was also about to leave on a flight for Paris, which accentuates the spontaneity of the image.

The second is the one of my dear friend Romy Ortega, whom I met on my first trip to São Paulo. She manages many music producers and DJ’s in Sao Paulo which I wanted to photograph and served as my unofficial guide to the city. The photo is where she sits on her parents rooftop where we stayed with their beloved dog. She wore her night dress, pink slippers and sat next to her dad's music event gear, with soft pink drapings from the laundry covering the one side of the image. This also - the pastel tones, casualness and ever present connection to music paints the Sao Paulo picture perfectly.

Do you have a relationship with any of the people you’ve shot in this series?

I do yes - they are some of my best friends I have abroad and can't wait for South Africa’s borders to open so that I can go back. I’m also dearly sad that Brazil is currently experiencing such a bad outbreak of COVID-19 due to mismanagement from their government.

What do you want to shoot after lockdown has ended?

I want to work with some local people in Cape Town or go back to Brazil ASAP. Would love to get connected in Rio also.

How can people support you?

They can let me take a picture of them and check me out on socials :) x

Credits: I would like to credit Romy Ortega for putting me in touch with my subjects and showing me around the city. She is my unofficial guide to São Paulo. The editorial with music producer and artist Diamante, his wife Kerolyn, muse Jenny and baby Shine was styled by Clara Pasqualini, owner and designer of Fauve Brand. Special thanks to Bernardo Ferraz, Paolla Di Monica, Thays Vita, Thay Rodrigues, Livia Ortega, Karen and all others that allowed me to document their Carnival experience in 2020.

See more of Carl’s work here and on Instagram.

The film traverses the off-the-wall psyche of Gen-Z by way of visionary Cape Town-based 3D artist Scum Boy who speaks in off-the-cuff one-liners that are brilliant, accessible and sincere.

A new cactus leather collection featuring sporting a collection of bucket hats and baseball caps in black, beige and a cool cactus green.