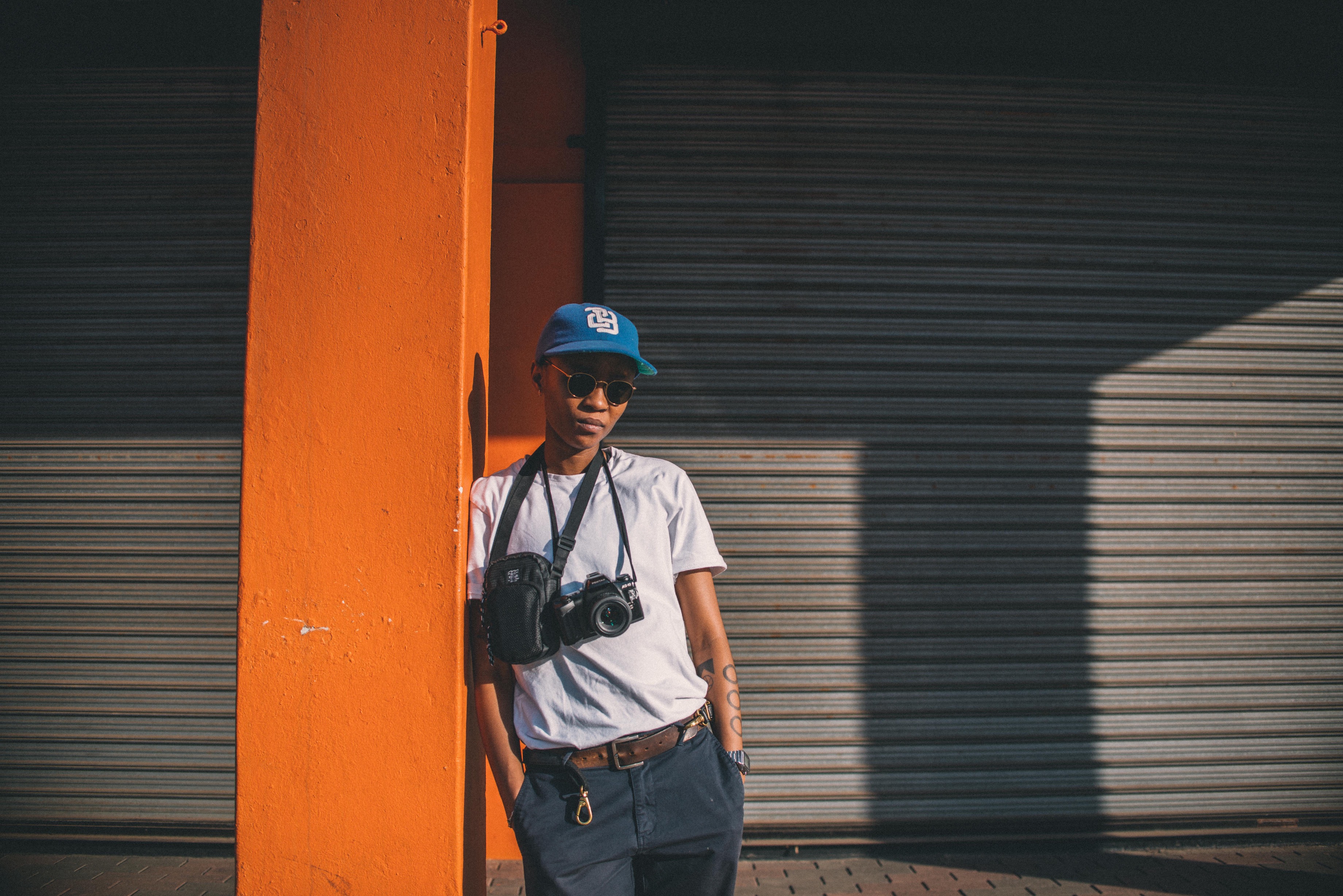 Neo Baepi is a self-described artist in the making, with major dreams of success. At five feet tall, they used to have a complex about their height but not anymore; a high self-esteem is something they’ve learnt to put effort into building. If you’ve seen their tweets, you’ll know that they have strong opinions and an even stronger photographic technique. After seeing the late broadcaster Xolani Gwala on SABC 1’s Asikhulume: Let’s Talk, Neo enrolled to study Photojournalism at the University still currently known as Rhodes, and they’ve gone on to work with some of the globe’s most renowned brands and faces.

Photography was a kind of inheritance for Neo. Their father has an interest in the technical aspects that go into making an image - but was never able to fully explore this as a career option growing up in apartheid South Africa - so when Neo picked up a camera at a very young age, and devoted themself to understanding how to take great photographs, their father supported them in ways that they acknowledge many parents often wouldn’t.

“I’ve always heard that good art and good design are predicated on empathy, so I chose portraiture to train that muscle”

“I’ve always heard that good art and good design are predicated on empathy, so I chose portraiture to train that muscle”. According to the photographer, when you begin to be considerate of a person’s entire being – “their complexities, their gender, their race, their shyness around the camera” – then you’re able to build a sense of empathy for one another, “and that in turn affects the image,” Neo notes.

Neo’s practice is underpinned by a philosophy of documenting black joy, manifesting as a personal statement of intent they’ve developed because of the support received from family; biological and chosen. Through portraiture, Neo has figured out how to display and celebrate the many different ways in which people embody their queerness and transness, often resulting in a visual intimacy that can only be achieved through care and compassion. Self-portraiture in particular has come in handy as a form of therapy, a way to develop self-love, and most importantly, a chance to use this deeply personal process of image-making as practice for future work.

“The more trans I get and the more non-binary I get, the more I think about everybody else. Everybody is in my frame of reference, as opposed to cis people who think of us as an after-thought. We [LGBT people] are always trying to find ways of being empathetic,” Neo mentions.

“The more trans I get and the more non-binary I get, the more I think about everybody else."

Neo’s journey of self-determination and of constantly fashioning a new self has made them more decisive about what they require in order to do their best. Working on large production sets, or music events, as they transition further into their identity has meant that this kind of work requires a never-ending negotiation of how they’re perceived and pre-judged – as a young, black, non-binary photographer – and this ends up taking up a lot of real estate in their mind. They’ve had to become more deliberate in being expressive about who they are, and what they won’t stand for, a luxury that straight, white, cis men (who dominate not only photography but every thinkable industry) do not have to think about. “I’m tired of having a low self-esteem, and I had it for so many years. I’m good at what I do, so if no one else wants to trust that, that’s not my problem,” they add.

As a former Capetonian now living and working in Johannesurg, Neo has extensive experience with both of these creative hubs. When comparing the creative scenes between the two cities, Neo notes how Cape Town might provide an opportunity to experiment and learn in what can be considered a more relaxed environment, whereas collaborative projects in Johannesburg have a sense of urgency and a financial objective.

The photographer’s work has appeared in collaborations with long-time friends, including projects with YouTube channel Pap Culture, a conversation with poet Maneo Mohale published in the anthology They Called Me Queer, and children’s book The Girl Without A Sound by actor Buhle Ngaba. The children’s book in particular has gone on to take a life of its own, even without Neo being actively involved, but it’s this ability of impactful work to continue to change people’s lives that Neo says best illustrates the power of honest and intentional collaboration. “I’ve only collaborated with the people that I love, with no financial gain, and if there is [financial gain] then it’s going to be further down the line,” Neo mentions.

A little known fact that is becoming increasingly public is Neo’s diverse taste in music and ability to bring good vibes to the dancefloor. With appearances on line-ups like Flourish & Death Drop Island in Johannesburg and Cape Town’s Prime, and sets spanning deep house, techno, and even rock music, the DJ-in-training still has boundaries, you can forget about hearing a treffer in their sets. “I love jazz and all its iterations, so even Amapiano is an iteration of jazz. Jazz is like everybody’s cousin.” Neo quips. DJing is an alternative expression that they don’t feel the need to monetize, it’s more a hobby that he wants to be good at, but compensation is always welcome.

Neo’s Twitter bio has, for the longest time, had the phrase “Undeterred, Deliberate” in it. This clear and concise focus on being very intentional and persistent - about their work, their desires and their creative decisions - continues to frame their ideas of what it would look like to cultivate joy in life and creative practice. Whether through visually capturing black queer joy, or providing the soundtrack to moments of pleasure, being empathetic serves as a politically informed and emotionally embodied praxis we can all get involved in.

A photographic series created as a reaction to the idea of “swart gevaar” and the idea of exploring physical and psychological spaces, a statement of pro-blackness and freedom of movement.