Again She Reigns has arrived to rewrite the narrative of African Women in our history as human beings, as a movement for the liberation of knowledge, ideas and bodies. BATUK, that is Carla Fonseca as Manteiga, and Nthato Mokgata as Spoek Mathambo have created and released a series of portraits of significant women in African history. This necessary work is for us to know where we come from, to restore what has been stolen and have that confirmation, that African Women have been contributing to society, that they in fact form the foundation of the modern world. Not just in the arts and mothering, but in the fields of science, technology, engineering, mathematics, medicine, astrology, agriculture and spirituality too. These portraits of women including Hypatia of Alexandria; a mathematician and lecturer who was murdered for her brilliance and Fezekile ‘Khwezi’ Khuzwayo, a martyr of rape in South Africa, bring a reckoning to the lie of male supremacy, and recognise African Women at the genesis of all there is, as we should be. The portraits are accompanied by an 8-track Extended Play. With the music and the images entwining to make our new world, where Every Body is included and seen as they are and as they want to be seen; as equitable makers of Life and History.

BATUK took the time to answer our questions, here they are in their own words. 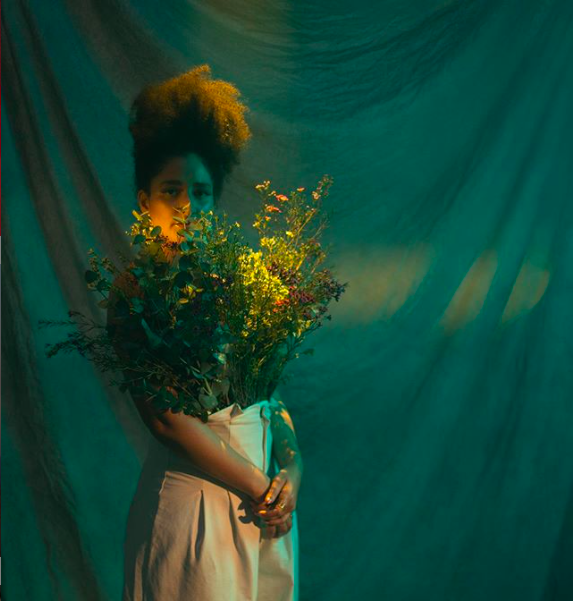 How did you select the women in the portraits for Again She Reigns?

Carla: The music came before the paintings and we wanted it to be about more than partying, we wanted it to be educational. And after reading about our continent and history we realised the importance of building our archives, in the form of books, music, art, just as many different archives as we can recreate. And it was very important for me to give praise to the women who have done incredible things over time. So we started gathering information from 100bc to the present. We narrowed this down to 9 women and 8 tracks. We learn so much in history in school but we don’t learn about our people. Our own mathematicians and scientists, revolutionaries, protestors and activities. So Nthato made the incredible production and then it was for me to decide which women suited which beat. I started writing, which Nthato helped with and then I worked on the melodies.

Following the music we were already working on the paintings and decided to combine them to make it a full visual and audio experience to honour these women. We wanted to exhibit the works with the audio playing with each painting but Covid happened. We have managed to exhibit the work separately in Cape Town at 99 Loop Gallery and in Luxemburg at the Luxemburg Art Fair. So it’s great that they can live separately and also live together.

Are you optimistic about the future for women?  What is your hope?

Carla: I’m so optimistic about the future of women and girls. I think we have stepped into a new form of consciousness, realising our power again and the need to retain power and be in the positions we deserve to be in. I think globally there is movement for it. With different legislations being passed that allow women to have better positions, at work, at home, in business and while patriarchy and white supremacy still exist and those two structures oppress us I do feel that we are giving the right attention to our girls so that they know that their quality is there and that they are anything and everything they want to be. I think the problem is that men can’t accept that. And that’s why we are physically, emotionally, mentally violated to be made to feel that we are less than. And this is the prehistoric bullshit that needs to be chucked away. I can only be hopeful and I can only be practical to be the change I want to see.

What does it mean to be a black woman in the music industry? In the world?

Carla: Being a black woman in the music industry means you have to work harder than any other women, any other person. We have to work HAAAARDD. And it’s weird because the greatest singers, the greatest musicians of all time are black women and black men. But a lot of black women. Aretha Franklin, Etta James, Miriam Makeba, Whitney Houston, Sibongile Khumalo, Rihanna, Beyoncé. The list goes on. And the fact is that we have to work hard, we can’t be mediocre, we have to be conscious and so calculated as it takes a lot more for us to be taken seriously.

Nthato: Superficially men's role is to be more active and vocal in the fight against patriarchy, gender based violence, and misogyny, whether in close quarters or broader society.

"We also need to be honest about what we value, it's bullshit to decry patriarchy but sing along to and promote patriarchal, misogynistic culture"

But the truth is that no one can break down anything external as long as it lives inside them, so us men/boys and the communities that educate and nurture us, need to take a serious look inside and recognise mentalities and behaviours that are detrimental not only to ourselves but to the collective. In this honest assessment, there shouldn't be "holy cows" or untouchable subjects or a desperate clutching to "culture" without reason or understanding. We need to assess our individual culpability in "boys don't cry" culture; booze culture; drug culture; casual sex culture; transactional sex culture, etc , as it pertains patriarchy,  gender based violence and misogyny.  We also need to be honest about what we value, it's bullshit to decry patriarchy but sing along to and promote patriarchal, misogynistic culture.

What is your hope in this regard?

Nthato: I hope that society can be honest about upholding toxic, non-constructive, social interactions as "culture". On an individual level, this is the standard we must hold ourselves to...and one another.

Again She Reigns is out on all streaming platforms today. Images of the portraits are featured. Read and Remember.

No items found.
No items found.
TRENDING
WATCH THIS: SCUM BOY – AN AWARD WINNING SHORT DOCUMENTARY BY ALLISON SWANK
WATCH THIS: MX BLOUSE - "PHUZAMANZI"
BATUK'S NEW EP "AGAIN SHE REIGNS" IS A POWERFUL MULTI-SENSORY EXPERIENCE CELEBRATING AND REWRITING THE ROLE OF AFRICAN WOMEN IN HISTORY
ISYOURS Presents Nothing Major on The Other Radio

ART SHOWS TO SEE THIS MONTH

Show your friends and family you're a well-rounded and cultured creative by visiting these new shows.